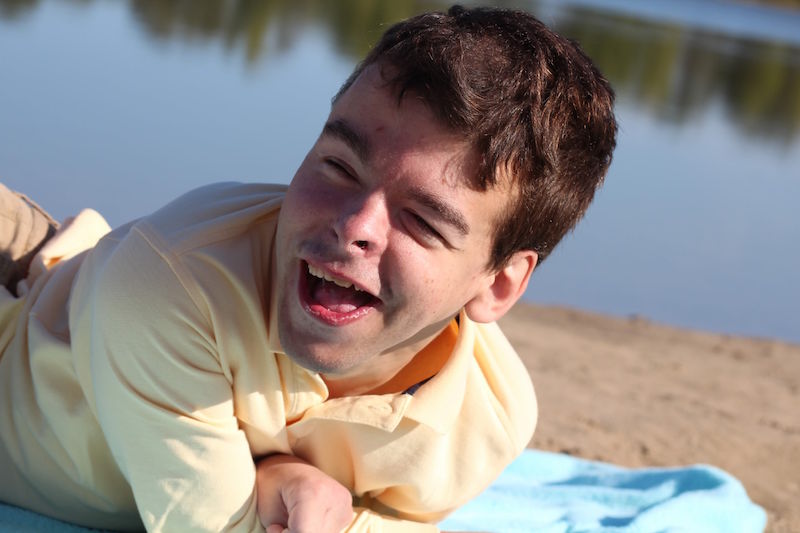 Justin at the beach.

Following a normal pregnancy, Justin Curtis Brown was born on February 3, 1982. He joined the family of his parents, Marc and Leslie, and his older brother, Brian. Three years later, he became a big brother to a sister, Chelsea. The team in the delivery room at Holland Hospital noticed some physical issues and mom and baby were taken by ambulance to Butterworth (Spectrum) Hospital in Grand Rapids. Justin spent the first month in neonatal intensive care and had the first of many surgeries; a shunt to drain extra fluid from his head was positioned. In the simplist of terms, Justin was missing sections of his brain and fluid was filling the vacant spaces. In addition, there were other physical issues, including his tibia being longer than the fibula in his leg which caused a severe bowing of his leg and foot. Eventually, the diagnosis of Oral Facial Digital Syndrome was made by a team from Boston, but local surgeons disagreed with this, so a firm cause to Justin’s many difficult problems has never existed.

By the age of eight, Justin had endured fifteen surgeries, many to replace a failing shunt. It became apparent that he would never walk, talk, or feed himself. He had trouble breathing regularly and there were many respiratory arrests   Through all of this, Justin’s personality emerged. He loved being with family and enjoyed a busy household with kids running and playing. The wilder the play, the more he laughed!

Ottawa Area Center and its wonderful teachers and staff, including his first teacher, Jean MacDonald, became a part of Justin’s life. They filled his days with fun and built on the strengths that he had. Sadly, Justin lost his father when he was 21 years old. As the age of 26 and graduation loomed, it became clear that without school, his life would be less filled with joy. While his family had always wanted him to live at home, it became apparent that a richer, more diverse life at Harbor House Ministries was a wonderful choice for Justin.

Today his life is filled with his family and a delightful and caring staff that continues to build on his strengths. He receives 24 hour medical care in a loving (and really fun!) home atmosphere. He loves taking the trash out, returning pop cans at the local grocery store, and helping deliver Random Acts of Kindness in the community. We continue to pray that Justin has a happy and pain free life!