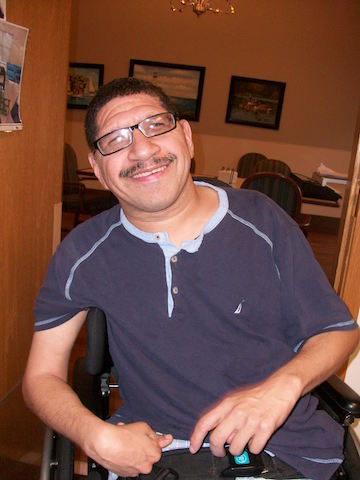 Joey Coronado was born in the small town of Navasota, Texas on December 30, 1965 to Isabel (Elizabeth) and John Coronado. He was born several months premature resulting in a hypoxic brain injury. At the time, premature births were rarely survivable and many perished early in infancy. Due to the attentiveness and love of his medical providers; particularly his nurses and family, Joey was able to beat the odds and survive. Several of his physician’s recommended placing Joey into an institution, a common practice in the 60’s; however, his mother soundly rejected that suggestion. Joey was included in every aspect of his family’s routine and became the nucleus of the family.

Living in a small town in Texas, there were few resources for a child with special needs. His mother intuitively provided him the nurturing necessary to become as self sufficient as possible. When Joey was three, his family moved to Kent City, Michigan. His parents divorced and his mother raised him on her own with the love and support of his ten brothers and sisters. The family received a definitive diagnosis of cerebral palsy and spastic quadriplegia. He then began attending Lincoln Developmental Center in Grand Rapids. He was fortunate to receive an excellent education expanding on the ground work his mother provided. Joey graduated at age 26. When his mother became ill with the effects of diabetes, his sister Lucy assumed his care and continues to provide the love and support which began with his mother. He moved to Detroit to be with Lucy and his brother-in-law, Ryan, while Ryan was receiving his medical degree at Wayne State. While living there, he was present for the birth of his niece, Gabriella.

Sadly, Joey’s mother passed away during this time and he has missed her greatly ever since. He was and will always be his Mama’s baby. Once his brother-in-law’s education was completed, his family of four then moved back to West Michigan and made their home in the Holland area. He was able to see his loving brothers and sisters much more now that he lived closer to them. He has always enjoyed spending as much time as possible with them and his much loved nieces and nephews. He is a wonderful uncle who always has hugs, kisses and a lap for them to sit on. Sadly, he also had a beloved sister, Toni, and a beloved brother John pass away.

After 20 years of living with his sister and her family, Joey came to live at Harbor House Ministries. Joey is cared for by a loving staff who provide him with such great care and lots of fun things to do. He loves to go on outings, swimming at the Cove, Friendship Ministries, playing with puzzles, his John Deere tractors and coloring. Although Joey’s birth trauma has confined him to a wheelchair and limited his verbal skills, it did nothing to diminish his personality. He has always been blessed with an abundance of charm and humor. He is quick to kiss a lady’s hand and always ready to flash his thousand watt smile. We are grateful for the wonderful care he receives at Harbor House and continue to pray for Joey’s health and happiness.